The “Bologna Process” is a series of ministerial meetings and agreements between European countries to ensure comparability in the standards and quality of higher-education qualifications. Through the Bologna accords, the process has created the European Higher Education Area under the Lisbon Recognition Convention. It is named after the University of Bologna, where the Bologna declaration was signed by education ministers from 29 European countries in 1999. The process was opened to other countries in the European Cultural Convention of the Council of Europe, and governmental meetings have been held in Prague (2001), Berlin (2003), Bergen (2005), London (2007) and Leuven (2009). 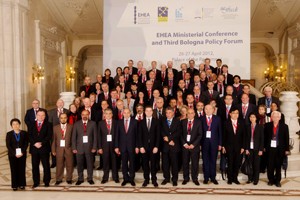 Before the signing of the Bologna declaration, the Magna Charta Universitatum was issued at a meeting of university rectors celebrating the 900th anniversary of the University of Bologna (and European universities) in 1988. One year before the declaration, education ministers Claude Allegre (France), Jürgen Rüttgers (Germany), Luigi Berlinguer (Italy) and Baroness Blackstone (UK) signed the Sorbonne declaration in Paris in 1998, committing themselves to “harmonising the architecture of the European Higher Education system”. The Bologna Process has 50 participating countries.

All member states of the EU are participating in the process, with the European Commission also a signatory. Monaco and San Marino are the only members of the Council of Europe which did not adopt the process. 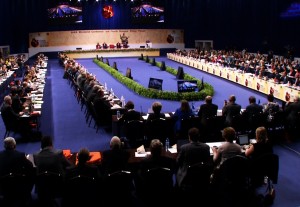 2009 Bologna Policy Forum
Australia’s active engagement with the Bologna Process was recognised with an invitation to the first Bologna Policy Forum that took place on April 29th 2009 at the University of Louvain-la-Neuve (Belgium). The Forum was the first of its kind to be organised between ministers of the 46 Bologna countries and colleagues from different parts of the world, reflecting the growing interest in the Bologna Process from countries outside Europe. It also reflected the increasing interest of European countries in developing closer links with other higher education systems.

These countries represented at the 2009 forum were Australia, Brazil, Canada, People’s Republic of China, Egypt, Ethiopia, Israel, Japan, Kazakhstan, Kyrgyzstan, Mexico, Morocco, New Zealand, Tunisia, the US, as well as the International Association of Universities.

The basic framework is three cycles of higher-education qualifications. The framework adopted by the ministers at their meeting in Bergen in 2005 defines the qualifications in terms of learning outcomes: statements of what students know and can do on completing their degrees. In describing the cycles, the framework uses the European Credit Transfer and Accumulation System (ECTS):
First cycle: typically 180–240 ECTS credits (a minimum of 60 credits per academic year), usually awarding a bachelor’s degree. The European Higher Education Area did not introduce the bachelor-with-honours programme, which allows graduates to receive a “BA hons.” degree (for example, in the UK, Australia and Canada) which (in the UK and Australia) may enable graduates to begin doctoral studies without first obtaining a master’s degree.
Second cycle: typically 90–120 ECTS credits (a minimum of 60 ECTS per academic year), usually awarding a master’s degree
Third cycle (doctoral degree): There is no concrete ECTS range, since the disciplines vary in length and comprehensiveness.

In most cases, it would take three to four years to earn a bachelor’s degree and another one or two years for a master’s degree. Doctoral degrees usually require another two to four years of specialization, primarily individual research under a mentor. Degree names may vary by country. One academic year corresponds to 60 ECTS credits, equivalent to 1,500–1,800 hours of study.

Cookies are text files containing small amounts of information, which your computer or mobile device downloads to your hard drive when you visit a website. Cookies allow web applications to respond to you as an individual. The web application can tailor its operations to your needs, likes and dislikes by gathering and remembering information about your preferences. A cookie in no way gives us access to your computer or any information about you, other than the data you choose to share with us.

You can opt-in or out of cookies at any time, you can do this through the web browser settings for each web browser you use on each device you use to access the internet. Disabling cookies may prevent you from taking full advantage of the website and accessing certain features (as outlined above clauses 3.1-3.6)

If there is any inconsistency or conflict between the English and Chinese versions of this Statement, the English version shall prevail.

Necessary Always Enabled
Necessary cookies are absolutely essential for the website to function properly. These cookies ensure basic functionalities and security features of the website, anonymously.
Functional
Functional cookies help to perform certain functionalities like sharing the content of the website on social media platforms, collect feedbacks, and other third-party features.
Performance
Performance cookies are used to understand and analyze the key performance indexes of the website which helps in delivering a better user experience for the visitors.
Analytics
Analytical cookies are used to understand how visitors interact with the website. These cookies help provide information on metrics the number of visitors, bounce rate, traffic source, etc.
Advertisement
Advertisement cookies are used to provide visitors with relevant ads and marketing campaigns. These cookies track visitors across websites and collect information to provide customized ads.
Others
Other uncategorized cookies are those that are being analyzed and have not been classified into a category as yet.
SAVE & ACCEPT